Fish finders come in all sorts of sizes and with various features, so their price tags move wildly across the board. If you’re looking to only spend $500 and nothing more, then the good news is that not only are there many fish finders that you can buy, but many of these have amazing features that will absolutely love.

Due to the price tag and need for excellence, we are going to focus on three series of fish finders: Lowrance Hook, Garmin Striker and Lowrance Elite. Each of these have amazing features that you’re sure to fall in love with, especially since you don’t have to spend too much on them. So, let’s compare them to see which one is best based on your needs and preferences.

Since we’re looking to spend $500 at most, which series best works around your budget? There’s nothing wrong with spending less than this cap if you can find something just as good at a lower price. Now, this is just an average and the wills of the market can change, but you can typically get these units for this roundabout price:

The lower price is based on their smaller units at the 5-inch scale, and the higher price is for their more feature-rich 7-inch units. As you can see, they are all fairly similar. The Hook is the best if you want to spend the least for a small unit, but they are all about the same for the larger models.

Overall, there’s no clear-cut winner here as they all fall in line in about the same pricing. All three of these series have smaller units at the 3-inch and 4-inch sizes which are even less expensive. We aren’t covering them in-depth here since they lack the power of the 5-inch and 7-inch units, but they may be good if you’re looking to save money.

What good is a fish finder if you can’t see the information? While you certainly wouldn’t use a fish finder to view movies and websites, you want everything to be clear and the colors to be vibrant. First of all, all of these fish finders offer LED backlighting so that you can see the sonar readings at any point in the day, so that’s good.

Now, as for resolution, we are going to look specifically at the 5-inch and 7-inch models since they are the best and more than likely the ones you’ll want in the $500 price range. The smaller models will likely have lower resolution, but they will be balanced with the smaller size.

Here’s where we start seeing some differences. All three of these series have a GPS, but how they function is very different. Let’s start with the Lowrance Elite. Both the Hook 5 and 7 have detailed GPS units that connect to various map programs, like HotMaps, Fishing Hotspots, and Lake Insight. There’s a microSD card slot so that you can easily update the program with new maps from your computer.

What about the Lowrance Hook? It’s from the same brand, so is the GPS functionality also similar? It is, allowing you to easily connect to all of the same map programs and also use microSD card slots to save and update maps. The only difference is that the Elite series is slightly better since it can hold bigger microSD cards, but the difference isn’t that big, so basically they are tied. 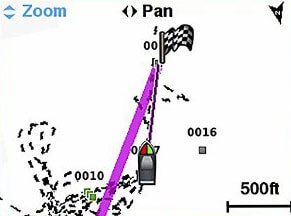 Now, what about the Garmin Striker units? The Striker gets a lot of things right, but it falters here. It has a GPS and it can save waypoints, allowing you to navigate from point A to point B. But does it connect to map programs? No. In fact, you can’t even generate whole trails, only waypoints.

So, if GPS is important to you and you need the best, then the Lowrance Elite wins with the Hook in a very close second. The Striker will guide you and give you your exact position, but it won’t connect to map software. There is some internal memory for saving waypoints, but aside from that you can’t even connect a microSD card to the fish finder, so there’s no way to sideload maps even if you wanted to go through all that work.

Every fish finder is there for one specific purpose: to help you find fish. If it can’t do that, then it’s useless. That’s why even the most basic fish finders have traditional sonar. Now, for $500 you should expect a little more than basic, and all of these have different imaging types.

Let’s start with the Lowrance Elite. Here you get traditional sonar and CHIRP, which creates a fanlike pattern to give you the best sonar results. Those are fairly basic though, so what else do you get? You can also use DownScan to get a fish’s POV along with StructureScan to get the best imaging around your boat as this gives you a 180-degree view around your vessel. Both the 5-inch and 7-inch versions come with this. 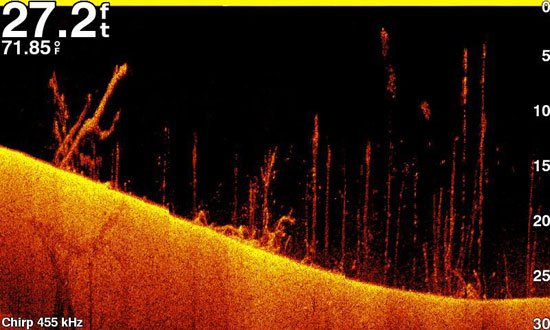 How does Garmin Striker stack up? The 5cv gives you traditional sonar and CHIRP, but the only other imaging type is ClearVu. This is similar to down imaging, just it’s a little wider than most other down imaging types.

The 7sv redeems the Striker a little because it has all of this along with SideVu, which gives you the whole 180-degree look around your boat. If side imaging is important, the 7sv would be your best bet.

Here’s where the Lowrance Hook falters a little. Both the 5-inch and 7-inch only come with traditional sonar, CHIRP, and down imaging. Neither has side imaging. They are intentionally built around simplicity, so it’s no surprise since many view side imaging as an extra tool or even a toy, but many have come to expect this from their preferred fish finders.

When we talk about the interface here, we are discussing how you interact with the unit. How do you select the type of imaging you want, change options, arrange different panels on the screen, and so on? And, more importantly, is interacting with the fish finder tedious or a breeze?

The short answer here is that all of these units have found a way to be easy on the finger so that you can easily switch back and forth between options, but they do differ in how they deliver that promise.

Both the Hook and Striker series only have a button-based interface. You have to push the buttons on the right side of the unit to change settings and control everything else. The Striker has more buttons while the Hook has fewer. It’s hard to say which is better in this regard. Once you get used to the interface the Striker is somewhat easier, but overall they are roughly the same. 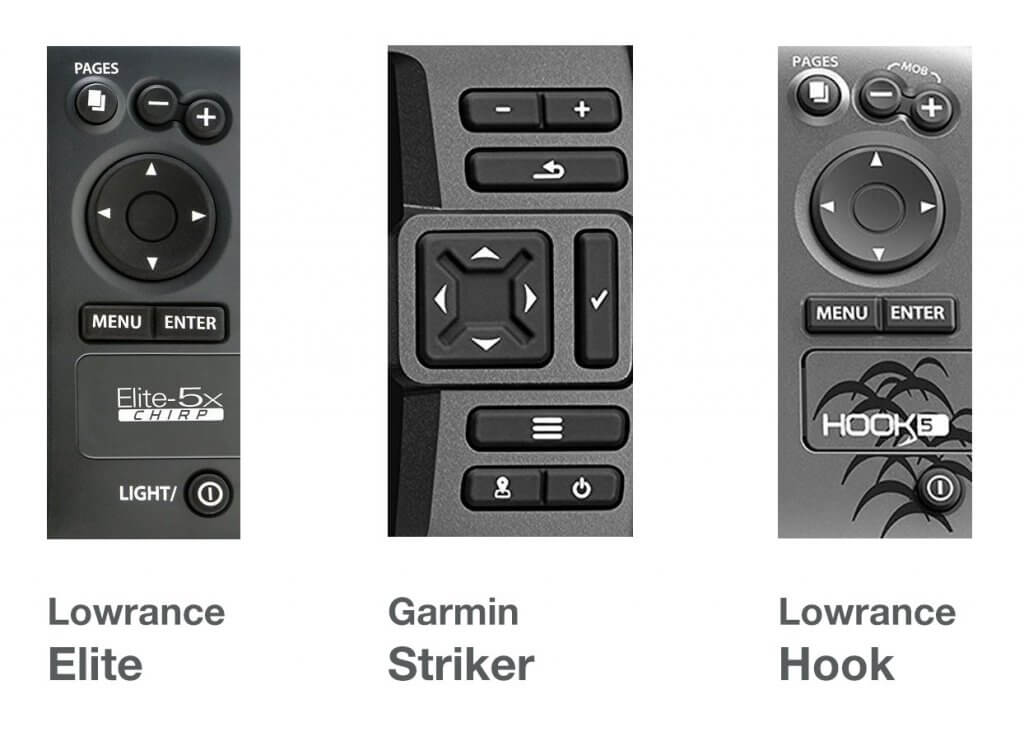 What about the Elite series? Both the 5-inch and 7-inch have buttons, but they also have touch screens. This allows you to easily push buttons on the screen and move things as necessary. There are also new buttons that appear based on your settings, ensuring that you have more control over imaging and other settings. This is a huge advantage unless you are against touch screens, which few people are.

So, if you’re obsessed with buttons, then rest assured that all of these have a button-based interface, but the Elite pulls ahead once again by giving you a touch screen to play around with.

Here’s another huge category. What is the maximum depth of each unit? Will it be enough to accommodate your fishing needs? This isn’t as simple as bunching the series together, as many of the units have different depths.

Let’s start at the low end and talk about the units that have a maximum depth on 1,000 feet. Here you’ll find the Lowrance Hook 5 and the Lowrance Elite 5. This is the lowest on this list, but this should be a good benchmark for the majority of fishing trips.

Going up to 2,300 feet in freshwater, you’ll find both Garmin Striker units. They have a maximum depth of 1,100 in saltwater though, so be prepared for that if you’re fishing in saltwater.

Next, at 2,500 feet of maximum depth, is the Lowrance Elite 7. Lastly and quite surprisingly is the Lowrance Hook 7 at 3,000 feet. This is accomplished by using the CHIRP at its lowest setting of 50kHz, which reaches extremely far distances.

Now remember that objects that are further away won’t appear as clearly as others, so depth isn’t everything, but the Lowrance Hook 7 takes the cake here, with the Lowrance Elite 7 just somewhat behind, and the Strikers just a little behind that. The smaller versions of the Hook and Elite should be fine for most fishing trips, but they may not have enough power if you’re going in deeper waters.

For those of you who are really into sonars and know-how, big deal frequencies can be in terms of depth and clarity, here we’ll go over the different frequencies that each unit has so that you know what they can do and how many sonar settings you can choose between.

Both Elite units have the same frequencies with 83/200kHz for traditional and CHIRP sonar, and 455/800kHz for the DownScan imaging. You can easily select between the two with the buttons or touch screen.

The Garmin Striker 5cv only has two settings for the sonar, 77/200kHz. However, the Garmin Striker 7sv gives you more options than most others on this list. You can choose 50/77/200kHz with the traditional sonar, and both the DownVu and SideVu come with 260/455/800kHz, giving you some extra options to play around with. 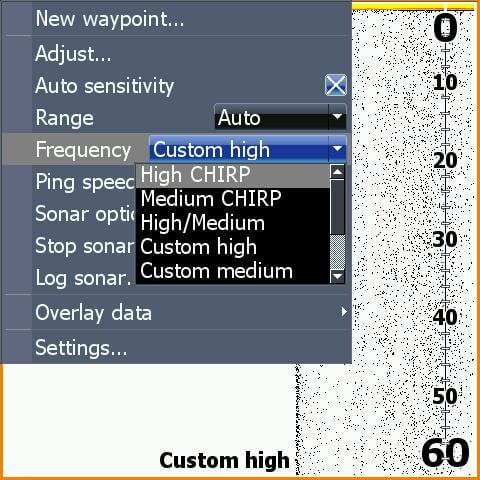 In general, the Striker 7sv is the best in this regard, plus it has the most options. However, these are all fairly standard frequencies that are found with many other fish finders.

This is important to note, but we won’t stay on it too long since this is another area where all of the fish finders are tied. Installation is exceedingly important since you need to make sure that the unit properly adheres to your boat so that you won’t lose it, and so that it stays in place as you try to read the sonar.

All of these units do a wonderful job and are very easy to install. You are given a good frame and the unit just screws in and that’s it. Nothing hard or complicated. Just set it and forget it, that’s it.

This is hard to determine since it depends so much on your preferences. However, both the Elite 5 and Elite 7 check the most marks when it comes to the best fish finder. You get the most types of imaging, with only the Striker 7sv coming close to them, and you also get touchscreen technology along with an accurate GPS that connects to various map programs.

Read Full Review
On the other hand, Hook2 7 has the best overall depth and the Striker 7sv is full of features. The Elite units are overall the best, but don’t let that close you off to the other fish finders, as they may have something that you need even more.

Read Full Review
You save: 6%

Disclosure: I’m a participant in the Amazon Services LLC Associates Program, an affiliate advertising program designed to provide a means for me to earn fees by linking to Amazon.com and affiliated sites.